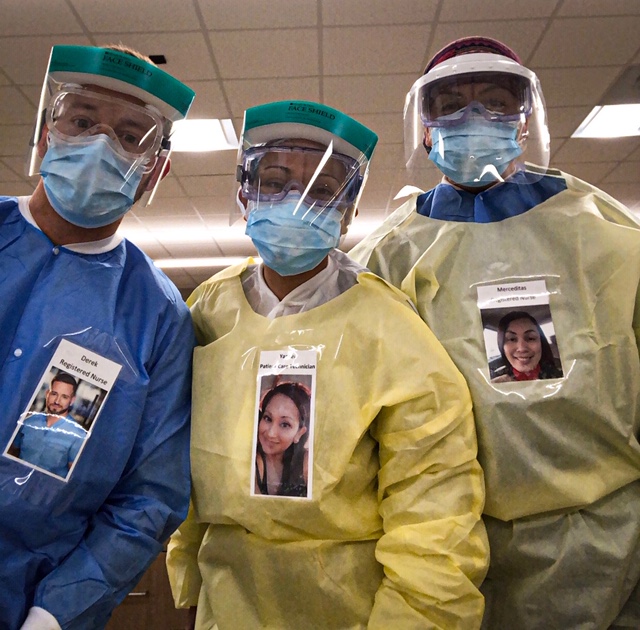 Running
Toward The Fire

A leader’s capacity to evolve and adapt is a desirable trait in any setting and with the present challenges brought on by a worldwide pandemic the question of “How do we adjust amidst uncertainty?” is the primary question for everyone. Our community of leaders is always a focus within Parnassus. What we build and how we think is shaped by the movers of health so we find this moment to be particularly poignant. Front and center is the question of what you do when many leadership absolutes are suddenly flipped on their head? The flip has been fascinating to consider.

“I was sitting in a place of confidence and there are teammates who are in a totally different place because they are looking at images of people in hazmat suits in New York and originally I wasn’t making that connection.”

Communication is one of the top three facets of any successful leader’s game. In healthcare the stakes are even higher. Patients, clinical teams and the collective of care allies have to feel seen and heard. With the background of uncertainty and many times fear, we are hearing how tough and important it is to get the right messages to your front lines teams.

Kathryn Cullen is a Divisional Vice President at DaVita and she was able to start an initiative within the organization that helped frontline team members who are on the fringe of core leadership messaging to get a better grasp on how the company leadership was handling the pandemic response. Networking confidence from senior leadership to the field, she realized that the people who are staring this in the face every day have their own native sense of reality based on a wide range of inputs and they are individually comparing the data to ascertain how they should feel.

Listening to many of you we hear you saying it’s not just about navigating Covid19, but also how you will look at things differently after the dust settles. “I was sitting in a place of confidence and there are teammates who are in a totally different place because they are looking at images of people in hazmat suits in New York and originally I wasn’t making that connection. When they hear their non-clinical manager who’s not on the front lines saying, “guys you’ve got it, our Chief Medical Officer said we’re going to be okay”, it’s hard for them to believe that.

So she started a campaign called “Show Not Tell” where they have been filming nurse leaders doing demos on proper precautions, filming acute nurses who are currently treating Covid19 positive patients in the hospital with the same equipment. None of them have been infected so sharing their testimonies and getting a more visually believable source for those front line teammates faster has been vital to their preparation.

Kathryn was also open with us around her own mindset shift given the swirl of priorities and unexpected challenges. Previously she would take on a few initiatives and iterate the conversation deep within her team until a general consensus forms and then they move to action. The current reality changes that. The super power at this moment is in rapid triage of priorities and empowering teams to spin action outward at the speed the situation requires.

“As important needs or ideas arise rather than me taking the ball and going the next eight steps with it, I’ve been a lot quicker to figure out which of my leaders would be the right person to be on point for this, and they take it from there and pull me in on it as necessary. There’s been a lot of trust to empower very quickly and it’s worked out really well, we have very talented people and I’m traditionally so protective of their time and that doesn’t work in an environment like this. What I’ve realized in this is that they answer the call and are ready.”

“I want to look back on this and see that I discovered something about my own character and level of resilience that I didn’t know I had.”

Sarah Cordeiro, an executive with Mednax, went down a similar path with us related to prioritization and even diving into areas that might actually be outside the scope of traditional roles.

“The reality is that we are not moving the ball forward with a lot of opportunities that were active just weeks ago, realizing hospitals are dealing with what’s in front of them right now. So we’ve expanded our sight outward into the organization with people in operations and hospital programs. We’re constantly inserting ourselves with them asking ‘what we can do, what can we pick up’. It may be administrative, it may be checking in with physicians to see how they’re doing or whatever the case may be. That’s been nice to see our team step up.”

Conversations have lifted another word to the surface. Grace. Daily interactions with family members, teammates, customers have all been altered and each category is materially affected in different ways.

“There’s been a lot of grace for those like myself who are trying to work full-time and have circumstances that require other emotional and time commitments with having families and other aspects of life. That’s been a gift…”

Sarah took us down this path. Walking with her you begin to see what she notes as “original motivation” that takes people into healthcare in the first place. The simple truth is that it is all about the humanity of being kind people, connecting hope with patients and animating meaningful interactions.

“There’s been a lot of grace for those like myself who are trying to work full-time and have circumstances that require other emotional and time commitments with having families and other aspects of life. That’s been a gift of understanding circumstances and trying to think outside the box in terms of how we work.”

Hard as it may seem right now, there is good that will come from a mutual experience like this and Sarah is encouraged by her own organization as stories emerge of teammates stepping up in their free time to make masks, surgical caps and organizing meal trains among many other contributions to the greater good.

There is a strain to all of this. When we get further into the dialogue with leaders they have been very transparent about the experience emotionally. Kathryn said she’s feeling an intensity and a stress level that she hasn’t before and has encouraged everybody to use available employee assistance programs and the benefits they have that allows them to speak to therapists in virtual sessions.

She opened that door for her team by taking the time to set up her own appointment. “I’ve been preaching that for a while and I’ve never done any of it myself. I wanted to be able to speak authentically on that topic.”

These certainly are hard times at present, but there is hope and light at the end of the tunnel. That’s another place for leaders to step in amidst the day-to-day to interject positivity. Not false hope or empty, over-reaching promises, but the ability to help people press the “reset” button on a daily basis and tackle things as they come.

“I have started telling my teammates they’ve already survived 100% of their bad days and they will get through this. I don’t know when that’s going to be, but then the choice becomes everyday what story you’re writing for yourself and for your time and what do you want to look back on and be proud of.”

Kathryn framed it this way. “It becomes a decision on what you want to remember about yourself and the way your team pulled together through the experience. I want to look back on this and see that I discovered something about my own character and level of resilience that I didn’t know I had.

I have started telling my teammates they’ve already survived 100% of their bad days and they will get through this. I don’t know when that’s going to be, but then the choice becomes everyday what story you’re writing for yourself and for your time and what do you want to look back on and be proud of.”

A key part of The Parnassus Group’s fabric and mission is based on the idea of fostering meaningful and thoughtful dialogue while building a strong community of leaders in healthcare. This guiding premise leads us into conversations with people from all corners of the industry and into the weeds of innovation related to care delivery, value based initiatives and how leaders are shifting their own focus in an ever changing environment. We are glad to be within this community amidst times that will test all of our innovation, resilience and grace.

The Parnassus Group recently came across Kathleen Stengel and her story, a career dedicated to children with developmental disabilities. Her work spans more than 20 years of developing programs around the treatment of these individuals through her expertise in Applied Behavior Analysis (ABA). She has degrees in both Psychology and Behavior Analysis, but in talking with Kathleen, the role she’s played in this part of healthcare clearly goes far beyond academics.